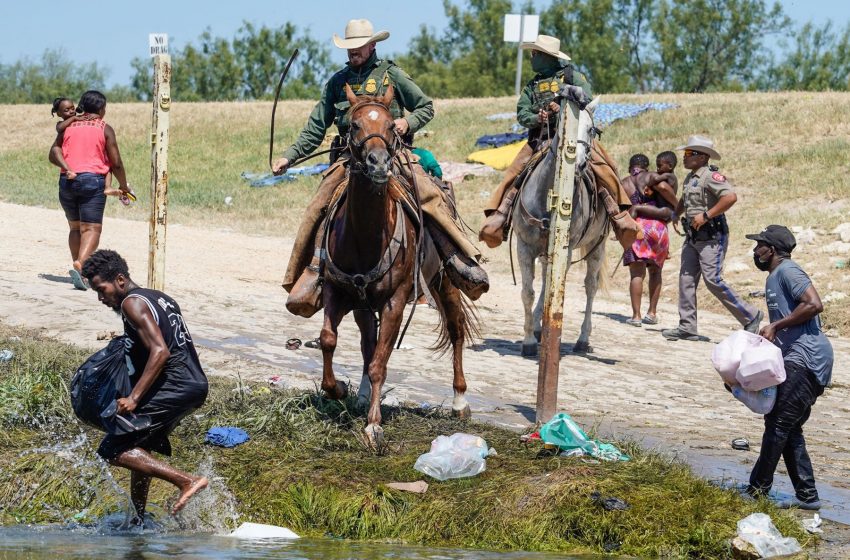 News about the mistreatment of Haitians by US Border Patrol agents made top news throughout the week with images showing Border Patrol agents on horseback whipping Haitian migrants. This has sparked much uproar within the Black community as the images that were surfacing were the all-too-familiar images of slavery when slave owners would ride on horseback whipping Black slaves.

This incident at the border proves that history is constantly repeating itself in the form of violence towards Black people. The images bring back painful memories of the days of slave patrols when slaves were hunted down, beaten, and sent back to the plantation. All during Post-Civil War America when the Ku Klux Klan policed the South and murdered thousands of Black Americans, including Black children.

On the US Customs and Border Protection (CBP) website, you will find its core values listed as, “Vigilance,” “Service to country,” and “Integrity.” What is interesting is that under “Integrity,” CBP states, “Integrity is our cornerstone. We are guided by the highest ethical and moral principles. Our actions bring honor to ourselves and our agency.”

CBP claims that they are guided by the highest ethical and moral principles, but how is it ethical and moral for Border Patrol agents to get on horseback and whip Haitians in similar style cruelty inflicted on Blacks during slavery? CBP prides itself on being professional in its last ethos statement, “We serve the American people with vigilance, integrity, and professionalism.”

How is this professionalism? How is it that border patrol agents who are trained at top law enforcement facilities with American taxpayer dollars behave in an unprofessional manner? Being a law enforcement officer is about being professional, even in the worst of times, just as much as it is about protecting the community from criminals. CBP is going against what they stand for and it cannot be tolerated.

America is supposed to be a leader in every positive aspect and that includes having the best and most professional law enforcement agencies in the world. Instead, many law enforcement agencies are acting recklessly and are violating the public’s trust—while humiliating America internationally. As a nation that upholds its values, swift and decisive action must be taken against the border patrol agents who mistreated the Haitian migrants.

On September 21, Department of Homeland Security (DHS) Secretary Alejandro Mayorkas stated that he was “horrified” by the images that he saw and that he “will take actions that those facts compel” about the investigation involving the border patrol agents and the Haitian migrants, according to an article published by The Hill. Secretary Mayorkas must use this opportunity to fix the wrongs that have been done by agencies like Immigration and Customs Enforcement (ICE) and CBP. If immigrants, the drivers of the American Dream, are continued to be mistreated, it will stain the Biden Administration and tarnish the reputation of the United States on the global stage.

The way that Black people are treated in America must change if America is to progress forward. Black Americans are not against the police, but rather against the structural racism that exists within American police departments and federal agencies. Structural racism within policing is the cause of harassment of people of color, unlawful detainment, search, and seizure of property, police brutality, and even the unjust use of lethal force. Racism in policing and policy is a serious issue that must be addressed to ensure that images like the ones seen throughout the media no longer conjure painful memories about America’s dark past.