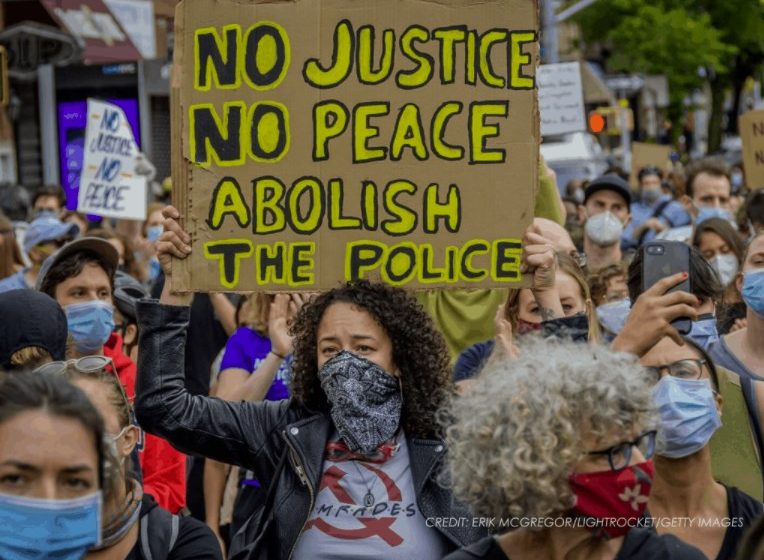 The George Floyd uprisings dramatically affected us all, inspiring many of us to challenge our own racial perceptions and the perceptions of those surrounding us. On a capitalistic note, they also caused major brands like Amazon and Netflix to release generic half-assed “Black Lives Matter” solidarity statements. Despite this, these uprisings are not a superficial result of the murder of George Floyd, but a generational revolt against the white supremacist ideals and hateful ideologies that have built the U.S. today. The police themselves can be traced back to its racist origins, as slave catcher patrols were formed in the 1700s to reclaim runaway “property.” Black and brown bodies have always been seen as a commodity, a mere tool to build plantations or missions, all to the sole benefit of the white man. This complete disregard for Black and brown life can be seen in the overt police violence in our neighborhoods, but is connected on a global scale to U.S. imperialism overseas.

What is U.S. Imperialism?

U.S. imperialism are the policies aimed at increasing U.S. political, economic, and cultural influence beyond its natural boundaries. In other words, it’s when the U.S. intervenes in areas it deems needs its white saviorship. U.S. involvement anywhere tends to destroy stability in the area, while implementing harmful conditions that affect the people living there for generations to come (e.g. the Middle East, Latin America, the Caribbean, and Asia). This idea of imperialism stems from a concept called “American exceptionalism” which has been a prevalent political thought since the American Revolution.

American exceptionalism is the belief that America is different from other countries because of our unique “mission” to spread freedom and democracy across the world. One of the original forms of white saviorship, American exceptionalism falsely tauts the idea that America is inherently better than other countries ideologically, militarily, and politically. With this in mind, white supremacy mimics this exact thought process by believing that whites are inherently superior than other races. American exceptionalism and white supremacist ideals can be connected to “manifest destiny” in the late 1800s, when settlers believed they were “divinely ordained” to move west and expand industrially—even if that meant killing the native people whose land we stand on today.

The U.S. has a long and bloody history of occupation in other countries for the sake of “democracy” and “freedom” that is based on white supremacist lies. The idea that other countries are too savage to organize and rule themselves is rooted in a complete disregard and belittlement for Black and brown life. When the U.S. occupied the Philippines, the media related the occupation to “teaching our little brown brother.” When the U.S. entered the Vietnam War to prevent the spread of communism and ensure a “free” Vietnam, they dropped 7.5 million tons of bombs on civilians and rural farmers.

One of the most horrendous examples of U.S. imperialism was the calculated invasion and overthrow of native Hawaiian people, which was then claimed as a U.S. state. Hawaii continues to face erasure today as many affluent white Americans flock to these islands and destroy the native culture originally there, pushing native Hawaiians out of their own lands (see also: gentrification in the U.S.) Even worse, military recruiters today aggressively target low-income communities, creating a cycle where oppressed people at home become oppressors overseas.

How does police brutality play a role into all of these global injustices? Well, the U.S. spends 54% of their discretionary spending, almost $700 billion dollars on military and defense. This extreme prioritization of violence and harm over care and collective action can also be seen in how domestic police budgets are disproportionately higher than any funds going towards social services combined. Even in at the beginning of a global pandemic still decimating our country, nurses and doctors were seen crafting PPE from garbage bags while police have millions of dollars worth of sonar weapons and riot gear to use against our own citizens during protests. The budget of our country is a direct representation of where our values lie and clearly, our capitalist and imperialist leaders care only about profit—especially at the detriment of Black and brown folks.

So what can we do? Hopefully the relationship between police brutality and U.S. imperialism has been made clear. Both stem from a white supremacist ideology that permeates every layer of our society today. Our violence against Black and brown bodies overseas is the same violence being enacted against Black and brown bodies at home. Abolishing police is just one step of a greater need for action. Police brutality is only the tip of the iceberg when it comes to how these systems of racism, capitalism, imperialism, and patriarchy have infiltrated and controlled our lives. So firstly, abolish the police.

Some may ask, “How will we protect ourselves?” Community care networks are our new future. We must unlearn relying on state institutions and relearn collective actions that we relied on long ago. Even now, nobody has our communities’ backs like we do. Jail support, COVID donations for homeless, community fridges, and even street medics at police brutality protests have shown us that all we need are ourselves. Community care networks of doctors, therapists, spiritual healers, social workers, crisis intervention specialists, rehabilitation centers, and shelters could provide so much more care and love to our communities than the police could ever even hope to provide.

Lastly, the call to abolish police cannot occur without also abolishing prisons. The United States has the largest prison population in the world with many of these cages for-profit. Although the media may have you believe that these prisons are filled with dangerous serial killers and rapists, in reality they are filled with poor people facing nonviolent offenses. We must decriminalize nonviolent crimes like homelessness or drug addiction, which should be handled by social services instead.

With this in mind, we cannot be abolitionists if we are asking for “justice” to be the same cages they’ve been throwing us into. Rethink your demand to arrest the cops who killed “—-”. Rethink your idea of justice.  We cannot demand justice while perpetuating the same prison-industrial complex that’s been oppressing us. Instead, we should focus on reparative or transformative justice.

Accountability should be understood as a community issue. By granting this collective space, there lies the loving potential for everyone to transform and evolve in some way. Resources and support for the victim should be abundant, with community pressure and transparency influencing the perpetrator to change and learn from the situation. In regards to non-violent offenses, we should always be fighting for complete dismantlement of capitalism; in other words, free healthcare, free housing, free food, and free education should be recognized as human rights! People who still believe we have to “earn” our right to live have been so blinded by the toxic system of capitalism.

In order for us to create a more loving world, we must be more loving to ourselves and each other. We must love ourselves and each other enough to know that we deserve basic human rights like free housing and free healthcare. We must dream and desire for a world where our lives aren’t wasted in 9 to 5 jobs as cogs in a capitalist machine. We must dream of a life where we’re able to pursue creativity, live freely, and love openly. A life where we actually have leisure time to mentally take care of ourselves so that then, we will be able to take care of others tenfold.

We must recognize the different abilities we each hold and use these unique traits to build a safe and loving community. Instead of forcing each other to be of some “use” to society, we must visualize a world where each is accepted and welcomed for any contribution they can make (end ableism!). We must dream of a world where profit is our last priority and our children and grandchildren are no longer exploited to death for the ruling 1%.

All in all, I know the George Floyd uprisings have shook our generation to the core. I encourage everyone to continue learning and unlearning. Below are a few ways to take action:

Ending police brutality is just one step to a better and more nurturing world. We, the people, have limitless power—and must realize that! The existing systems dominating us know that if we realize our true potential, their oppressive reign will come to an end. As chanted in protest, “Rise up, my people, rise up!”