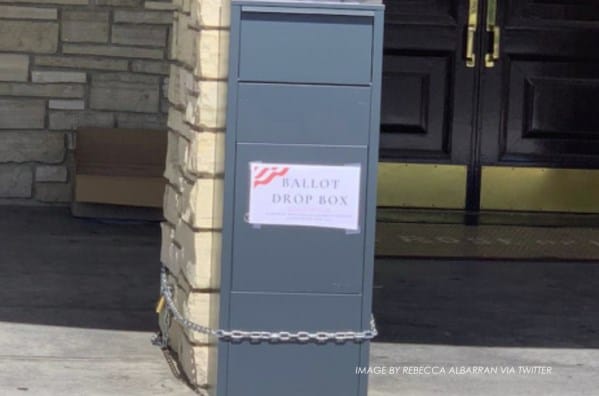 Voter suppression has taken many different forms all throughout the years. Unfortunately, voter suppression is alive and well; and thriving too well for comfort. California has recently announced an investigation into fake ballot boxes that have popped up in several counties. This recent wave of corruption is not surprising to most of us, but it is exhausting as we enter election time once again. The fake ballot boxes are just another example of why the American people are so distrustful of our government and election processes.

Many of these fake ballot boxes appeared in gyms, churches, retail centers, and even gas stations. Most of these ballot boxes appear exactly the same as official ones, yet the California Republican Party are the ones who illegally planted them in multiple locations. In an email, state GOP spokesperson Hector Barajas said the party will “continue our ballot harvesting program and not allow the Secretary of State to suppress the vote.” The Republican Party argues that many ballots are already collected by individuals who go door to door, so there is already a level of corruption possible. They argue that these ballot boxes are an even more secure measure of collecting people’s votes as they are not given to an individual and instead dropped off to trusted community locations.

Democratic Assemblywoman Christy Smith issued a statement on the matter that partially reads:

The California Republican Party is peddling a massive, illegal and coordinated misinformation campaign to distract from our institutional, trusted voting processes. Californians need to know that voting by mail in California, whether by an official dropbox or by placing their signed and dated ballot in the mail, is safe and secure.

In reality, when an individual or entity collects your ballot, you actually have to sign consent and awareness of granting your ballot to this person. In the case of these ballot boxes, there was no known consent or awareness that people were granting their votes to the California Republican party. This breach of consent is a major issue and threatens the security of all ballots nationwide. If this is happening in California, most likely this kind of “fake ballot box” scheme has also popped up in other states, or at least another similar form of treachery.

California authorities are now launching a full-blown criminal investigation into these illegal ballot boxes. Whether any actual consequences will be suffered by the California Republican Party stands to be seen, but the damage has already been done.

Voter suppression exists on multiple planes, not just in physical illegal ballot boxes. Misinformation and confusing regulations are another form of voter suppression that continues to affect voters year after year.

For instance, the Fresno County Republicans’ website read, “Don’t take a chance that your vote will not be counted. Once your ballot arrives in the mail… Walk it into one of the secure locations below.” The locations listed spots where the illegal ballot boxes were planted. This notice has since been taken down, but it shows how entrenched this scheme was. Every election, each party continues to push forward carefully curated information that doesn’t offer a clear consensus on voter rights and regulations. In order to combat this, voters are encouraged to do their diligent research and be aware of any scams threatening the acceptance of their vote.